He is known in the world's financial centres as Japan's first M&A adviser, as well as a highly respected investor.
However, he has cast off and moved on from the achivements of the past and is now making an impactful investment into Myanmar to help Noble laureate, Aung San Suu Kyi's new government.
(reported by Akihiro Fujiwara)
Interview Title: "Suu Kyi as landlady changed my life"

-Did you stay at Aung San Suu Kyi's house in Oxford in 1984?
"She came to say hello when I was reading a Japanese newspaper at the Nissan Institute.
She was very friendly and approachable.
Two years later, I met her by chance in the road. She asked me whether I wanted to rent her top floor.
I became the first lodger in her house.
Most people find this story extraordinary, especially those people who came to know her recently as they think she does not appear approachable.

-Why do you think Dr Suu Kyi invite you to be her lodger?
"It seems that Japanese students do not make much noises by inviting many friends round.
She, Michael (her late husband) and I had dinner together at her home, and she also explained how her father respected Japanese.

- Where are you making investments?
"Building the most modern type of rice milling centre which has the best form of technology with capability of doubling the productivity of farmers.
Also, I want to bring the world's best technologies in aquaculture which casue zero damage to the environment of the country which preserve nature.
The Burmese average age is only 26 years old.
It is similar to that of Japan at the beginning of Meiji Restoration.
The growth potential is huge.

- You have built your reputation being the first Japanese M&A adviser. Is that experience relevant?
"The M&A adviser's job is to advise clients to buy companies cheaply or sell expensive companies.
There is no direct relation to what I do now.
However, being the first in the business, I need to be creative to be both liked and supported by clients.
For example, clients love my proposal that our fees are directly linked to the acquisition price in order to align the interest between the clients and advisers.
Everyone liked this idea.

- You became independent in 2004 and started your own fund which turned out to be a huge success
"It was the time for hedge funds.
I was fortunate to have $100m on Day 1 which grew to over $200m by the end of 2005, winning the fund of the year award for Japanese equities.
It was pure luck.  I was lucky.

- Will you continue investing in the global markets?
"I no longer go short equities to make money.
I shifted from being a hedge fund manager to private equity and rather focus on areas of growth.
Myanmar amongst other South Asian countries is an obvious destination. 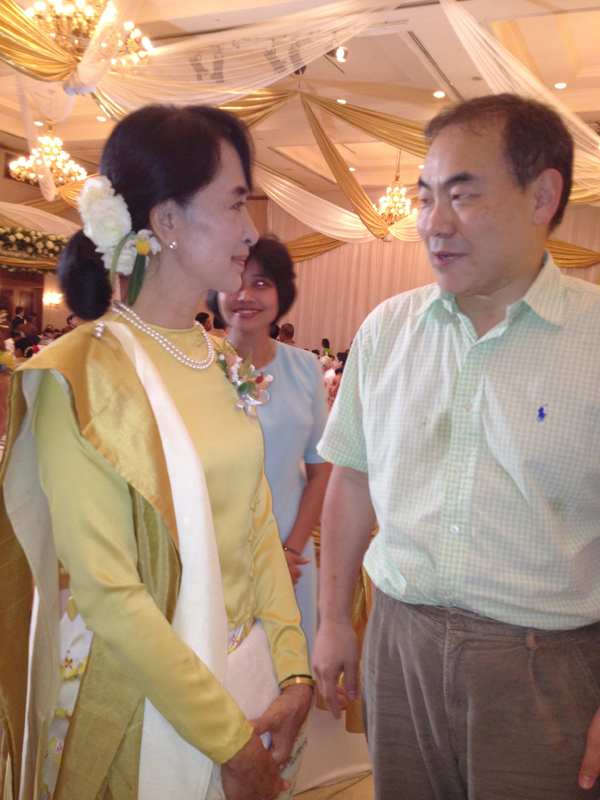 Profile
Born on 10th August, 1959
Graduated from Rokko High School and Waseda University
Moved into M&A advisory while he was studing at Oxford University, and became Japan's first real M&A Adviser
After being CEO of one of the major European Bank's Japan subsidiary, he became independent in 2004
From April 2014, CEO of Myanmar Restoration Fund56 years old, born in Hyogo Prefecture


Significant Data points of the Leader

Significant turning point in his life
It was back in March 2016 when the NDL government started in Myanmar."I was rather surprised that my ex-land lady was so charismatic.I would not have become so enthusiastic towards Myanmar if I did not meet her."

Spouse
Married four years after I met my wife in 1988."My wife was working for a British competitor bank when we met.She's a very internationally minded woman.She was keen to move and live in the UK.At home, my wife is in charge. (laughs)"